One day, a cliant asked me to create a website under the condition of “WordPress + multilingualization”.

To tell you the truth, I have never built a multilingual website until then. so I decided to try various way to testing to make demo sites.

during the buliding, I thought it’s a bit difficult to find multiplicated WordPress website with good qualities.

I felt the following points at that time.

In, i think that i use the report this time that I examined variousthings, and practiced variously myself.

*Each installation method is not posted on this site as of July 2019.We will tell you only the concept first, and we will also provide details on how to install it later.At present, the installation method is written in detail, so i have put a link of the site i’ve been referring to (not site-san), if you need, please refer to that.

Multilingualization and translation are different

The first thing you need to understand is this.

People of the general amateur, including myself, “WordPress multilingualization”, and “when you install a plug-in or something, i wonder if the page of English or Chinese is created automatically without permissionI have an image that.

In fact, some of them are close to that, but even if you use plug-ins, you have to prepare multilingualand translation tools separately.Image as follows

WordPress multilingualization → Japanese page (or post) create → automaticmulti-language format (the content is only a blank or image is or is.Or you can do automatic translation using the plug-in → you have to correct it yourself (a little lousy translation of the machine) or fill in the text from one to more.

If you are confident in the multi-language language, you may make it from scratch, or have you translate it roughly, such as a translation plug-in, you may add a correction of the details from there.It’s good to ask someone.I don’t think there’s anything that says it’s absolutely useless to use the translation of a machine as it is.

In any case, at the moment, we must throw away the illusion that only automatic translation of machines can lead to high-quality pages in other languages.※ In a few years the translation function will advance dramatically, but you may be able to have a high degree of perfection automatically .

Multi-lingual is just a switch between two languages!?

No, it’s not.You can switch between three or more countries if you want to use this method.

below is my multi-lingual blog-site.

As far as I’ve looked into it, i’ve found out.WordPress can be considered as an internationalization of the following three broadly.

b. Use multilingual plug-ins

etc. Use multiple servers (in each language country)

Note: As of June 2019, there is no introduction of how to set it up by myself in this paper.It is scheduled to be published later, but i have posted the URL of the page that I was referring at this time.

However, for those of you who are going to work on multilingualization in the future, all of the aboveIt’s a kanji, isn’t it?Don’t worry.I will explain in order.

And one before that.

WordPress has a theme that supports internationalization, you need to use it.Otherwise, even if you intend to multilingual according to the above method, or the default (originally) characters are displayed in some places of the administration page and other sites remain in Japanese, it seems to garbled.I’m sorry to use the vague expression “it’s like…”.We haven’t tried a theme that doesn’t support internationalization, so we haven’t checked the facts.）

The following pages were very helpful to find international themes, so please refer to them if you like.

Many free!How to find multi-lingual themes in WordPress

About each characteristic and there or nothing

c. Use multi-server type (multiple servers in each language country)

First of all, “c. Multi-server (using servers in countries in each language).

“Why is it from c!?” It is likely to be said, but there is no particular meaning.However, this “c.I didn’t think so, so I took it off my options at first.

What this means, for example, Japanese and English sites as the words, i’m making a site, such as renting a server in each country.It is simply to make a japanese server in Japanese, a new American server in English. 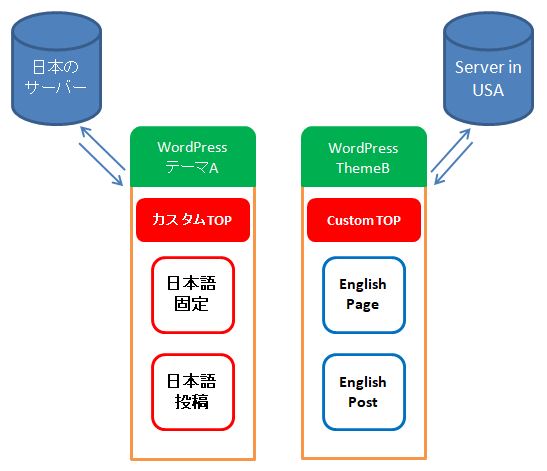 There is an advantage in its own way here, too.Since each is created on their own servers, or fast display speed, it is also possible to use a completely different design and plug-ins.

On the other hand, it takes too much time.Another server, another database, because it will be a separate site, maintenance and operation will also be required twice normal.To begin with, server contracts and trouble correspondence of other countries, such as, must be communicated with the native, if you do not have a considerable length of language of the country will be stuck in operation every time.

So, this 3.was first and foremost out of the option.There might be a case of the company etc. of a moderate scale operating.

Next, I tried this “multi-siteization”.

I had to fiddle with the code a little bit, but I like this type quite a bit.

In fact, another site has implemented this “multi-site type”.

“Listen to what you like!I’m going to tell you about the characteristics.

First, use the multi-site function implemented in WordPress to create a foreign language version in a subdomain or subdirectory.As an image, I feel like making another type of site of the other country version corresponding to the Japanese version of the site.In, i’m going to switch the display using a plug-in called “Multisite Language Switcher”, the file page i created in the main domain and subdomain, respectively. 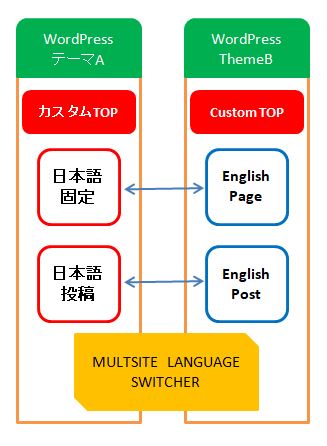 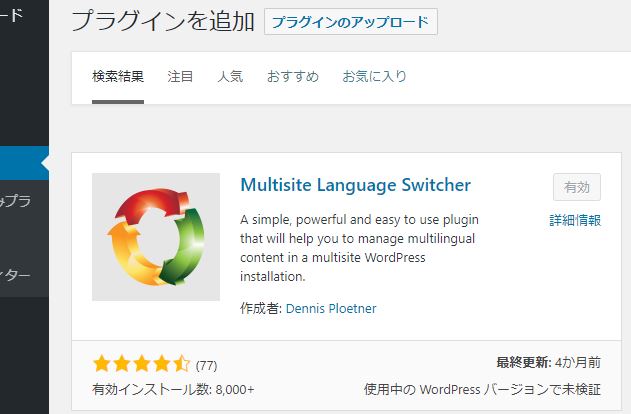 As I mentioned at the beginning, we do not have any details on how to multilingual our site at this time.When I multilingual WordPress instead, so i put the URL of the site that i was referring, if you need to see there.

WordPress multi-site and i tried to multi-lingual summary

So, the last thing I tried was to use a multilingual plug-in.There are disadvantages such as “it may interfere with other plug-ins” and “the site may become heavy”, but the above “c. multi-server type” and “a. Because there is also the merit that installation and operation is easy to install and operate far compared to the multi-site type], i decided to try to focus on the three plug-ins of the reputation among them.

As shown in the following image, in this type, we have taken the method of making one site (Japanese if japanese-based) first, and making a copy of each page in the same site.

However, WPML gave up the trial this time.

WordPress is quite famous in the multilingual plug-in, and some sites, so i was claiming to be the “strongest”, i thought it was worth a try even if it is paid.However, i was allowed to refer to the following information, but i decided to give up that there are relatively many possibilities of interference with other plug-ins heavy (but i had a way to try for free for the time being …).

Here, I’m a plug-in of the contact form that is well taken care of [contact form 7] is a plug-in made by the same creator.Therefore, it has become the making that is very easy to understand to the Japanese.

The way to use is to create a format copy of the multilingual version of the post page, fixed page, menu, widget, etc. made in Japanese.

Since the copy is only created, wordpress display settings [ management screen of the “settings” is just “Setting” and such as the full text translation is in Japanese [page for English site] is created.It is convenient because the image etc. are copied as it is, but the sentence is not necessary to rewrite the full text multi-lingual.

I introduce it with a little image.

This time wordpress is created by default “sample page” is an example of multilingual using Bogo.

Next, when you open the edit screen of the page created in Japanese, the button “Add Translation” appears on the right side. 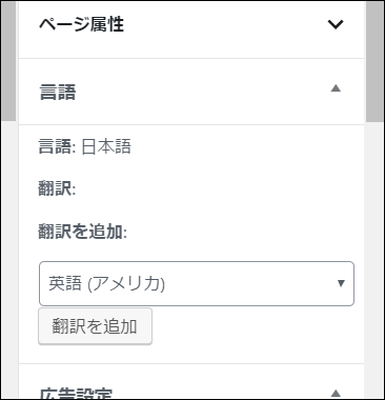 , press this “Add Translation” to create a copy of the Japanese page you are currently editing. 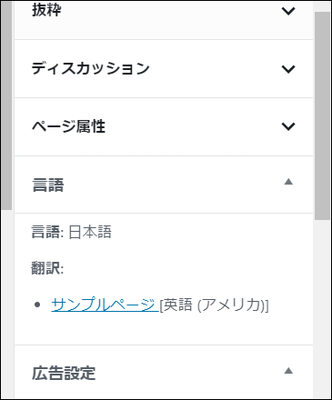 The “Sample Page” above is a link to the copy (translation) page.

However, the Japanese page of the original version is only copied as it is as follows even if it is said that it is a copy.From here, you have to translate all the sentences into multiple languages.

Images are also copied as they are, so it’s useful. 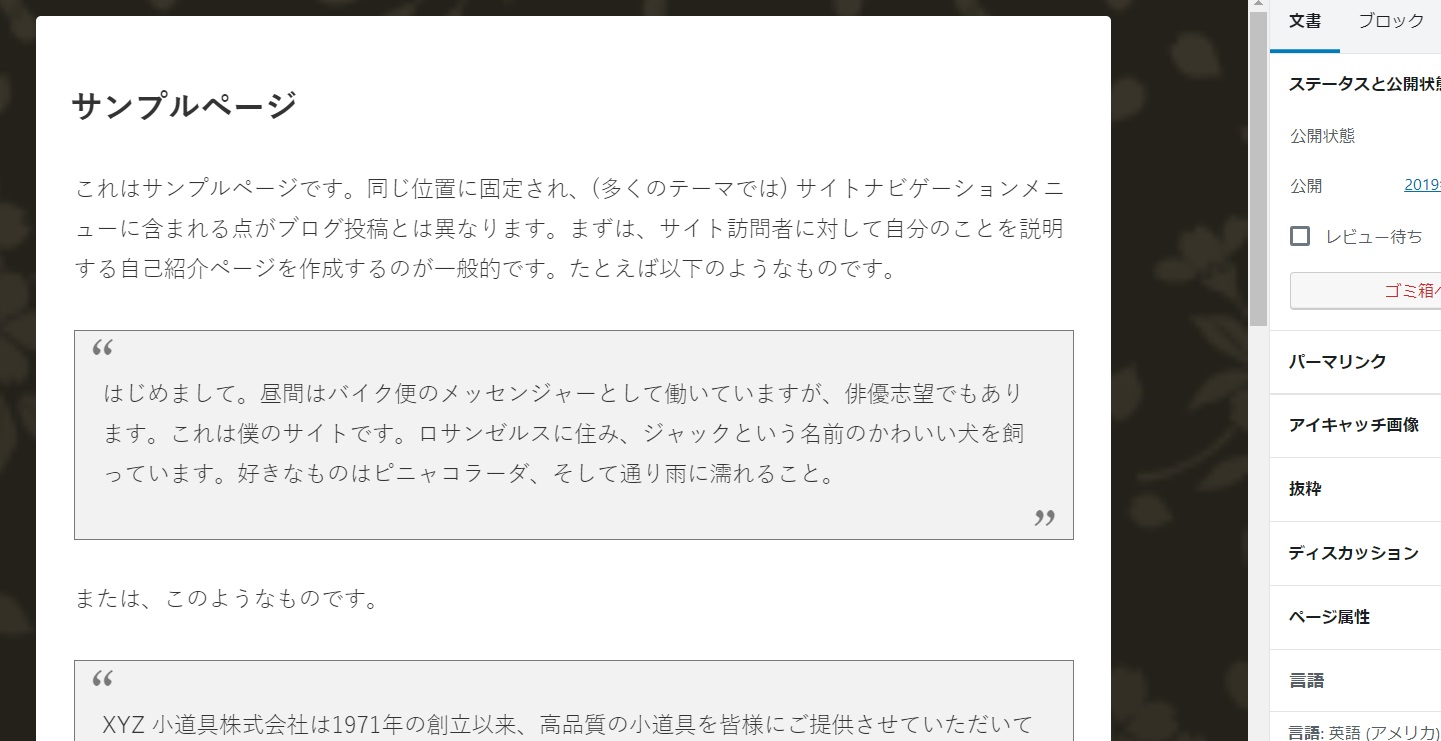 By the way, if you look at the fixed page and the list page of the post, you can see that the link of the Japanese page and the multi-lingual page is already made as follows.

To introduce polylang at the end

What i’ll hide, the multilingual plug-in that we’re using for this site is Polylang, the theme is Cocoon by the way, but this combination is greatIt is enough to look like a professional in the site that the old man who is like me made.Oh, not really. It’s a good time.

Cocoon does not dig deep here because it deviates from the main subject, but the nickname of polylang does not seem to be bad first.The plug-in is kept to a basic minimum, but it does not interfere so far.

When asked if it compares to Bogo, i can’t say which one is still in operation, but Polylang has a translation tool called Lingotek Translation in a set. This was very much appreciated to me.

Polylang also from the management screen of WordPress → “plug-in” → “New addition” page of the search window and polylang and enable it so you come out.※ In this case, “Lingotek Translation” is also installed in the set and displayed in the menu, if you need a translation tool is convenient to introduce at the same time.

In, like Bogo, i created a Japanese page and post.On the right side of the edit screen, click 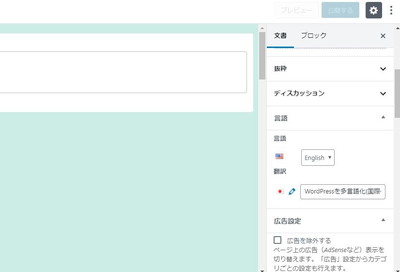 “Eh-Then, what do you do with internationalization theme or multilingual plug-in?I think that there are many people who think.I thought so, too.

These, wordpress default s i’m a tool that can change the language of the management screen and description portion that is written at the time of the download base.

Suitable for corporate sites that don’t post or update often

You don’t want to change the design or format of the language pages too much.(Especially when you use a theme with a lot of customization features, such as paid themes.

I think it is the most famous as a free multilingual plug-in.

I’ve tried the themes on cocoon+Bogo and newp+Bogo, both of which are running without any problems.

Here, one post or fixed page will create a corresponding foreign language page.Create, but simply the title and the text is just a page that is no entry.However, the difference between multisite langage switcher and polylang, because the image and the thing is created exactly the same as the Japanese page, it is easy to just translate the rest.※ However, in the case of other plug-ins is that you only need to co-pipe

It was so easy to embed Twitter tweets and timelines on your WordPress site!

I want my Twitter timeline to appear automatically on my site! I have never thought of such a thing, until I visited a s...
It was so easy to embed Twitter tweets and timelines on your WordPress site!